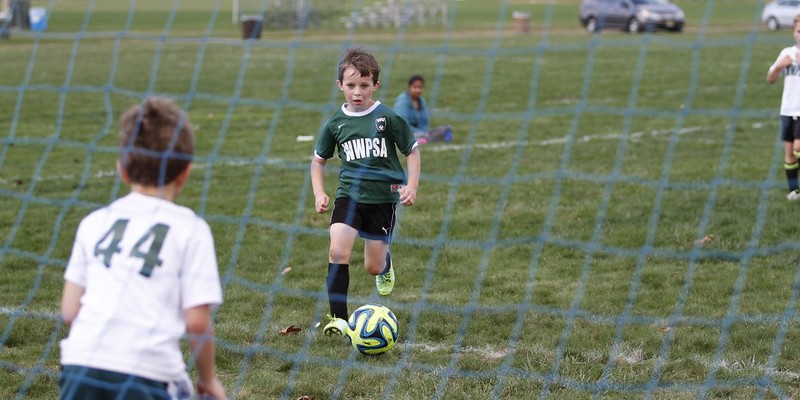 One of the greatest questions in youth soccer is: Can you create a goal-scorer?  Or is it that some players are just born with the knack of putting the ball in the back of the net?  I believe there is  evidence in both, and as youth soccer coaches we have the ability of shaping a young player’s future with the proper technical, tactical, and maybe most important psychological aspects of success inside the attacking 3rd.  The purpose of this article is to give coaches some ideas of what it takes to craft a true striker.  Feel free to comment at the bottom of the page with your own thoughts as I am sure as coaches you have your own methods and insight in prepping your players to hit the back of the net.

First you need to build the player’s confidence around goal:  This is done in training with drills built for early success allowing the player to see the ball go into the back of the net.  This means just a few technical points, a big goal, and no goal keeper or defenders to beat.  Keying in on the plant foot (next to the ball) and keeping the head down during the strike (to ensure good contact) and being encouraging with every shot that hits frame.  Starting at a young age is key, but there is no reason you can’t teach a teenager to score goals because as long as you give kids an opportunity to do it in training and games the athletes will find a way.*

Then you need to build technique:  There are a lot of coaching points to craft the perfect strike technique with the laces.  The ones I use are here…

Of course you also need to teach goal-scorers to finish around net, which would be with the instep.  However, I feel this is more inherent and players should use passing technique with similar coaching points to the ones above to generate success.

For you visual learners, here is a series of pictures taken from my Pre-Travel program (for 5-9 year olds) that displays what strike technique should look like at a young age. 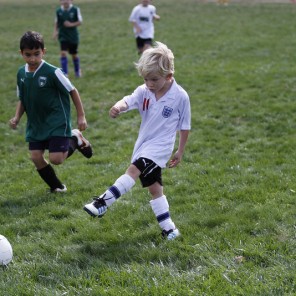 Give the player a chance to score in a game.  If I go to your team (U13 and below) and ask every player what position do you play?  and they give me a single position, “right back,” something is wrong.  Players should always be experimented with, thrown out of their comfort level, and challenged with learning a new position (Often college players play an entirely different position than they played with their club team).  Playing striker is no different, and a player will not learn to score goals without being put in a position to do so.  Yes, we all want our best goal-scorer up front because it gives our team the best chance to win.  I also know a lot of coaches out there (like myself) play a 3-3-1 formation in 8v8 format and it is tough to cycle kids through a single striker shape.  Although it is clear a kid won’t get over the nerves around goal or build the aggression/anticipation skills it takes to be a true goal-scorer without the opportunity to do so.

Finally, make sure the kids are watching soccer!  Both professional games and of themselves playing.  They need to watch professional soccer to see the movement and tactics of a goal-scorer  (Aguero or Suarez would be my choice) and attempt to emulate their confidence around the penalty area.  It is so beneficial to players to watch soccer at all levels because it is an entirely different perspective from within the game.  Seeing the movement of 2-10 players simultaneously from a professional angle is so helpful, especially with commentators that have played and experienced the game at the highest level.  We have the privilege in this country with soccer on TV every day now (this wasn’t nearly the case when I grew up), and parents and coaches should be encouraging their kids to watch it.  Watching video of their own games is also a vital part of player development.  Actually seeing what worked and what did not before a shot and reflecting on a game played a few days or a week later is a very effective form of teaching.  Clubs and tournaments are investing in hi-pods as a tool to record games (we have one in West Windsor, and it’s a fantastic piece of machinery) and kids seem very interested in seeing what they look like on the field of play.  It is a great motivation tool to sit a striker down and review a game where they put a few in the net; and now that we have greater capability to do so, coaches should be posting games on youtube and on their team homepage with positive moments to build confidence in the attacking 3rd.

Of course as coaches we need to identify those players that want to score, and were born with the ability, as I truly believe they exist.  Trainers need to facilitate those players’ abilities with the points in this article and also keep an open mind for athletes with the potential to grow into the role over time.  NJ coaches do have the ability to create a goal-scorer and should always aim to do so, because it takes a rare combination of skill, craft, poise, and anticipation to be a true “finisher” of the ball.  Every great team has at least one, and every good team needs one, so it is important we recognize at an early age the potential within a player to put the ball in the back of the net.

*I have a U15 player that played defense her whole life, but I have slowly integrated her to a winger position and after consistent opportunity and confidence building she is now finding the back of the net.  At first she had no interest in doing it, but as she saw the ball go in game after game, it is beginning to become 2nd nature for her.

2 thoughts on “Creating A NJ Goal-Scorer”